The mobile tablet technology movement is on “fire” and Amazon has just released the new Kindle Fire. The tablet appears as though it will provide the same valuable components and features as the iPad minus the built in camera and at less than half the price. Has the Apple iPad finally met its match? 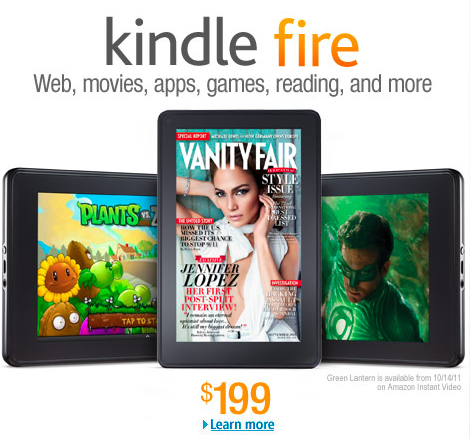 The Amazon Kindle Fire will offer owners some great mobile tools and features. The Kindle has movies, apps, games, music, reading and more, plus Amazon’s revolutionary, cloud-accelerated web browser.  It’s more compact than most tablets, and will not feature some of the same hardware as the others, but it will feature the following:

Comparing mobile devices especially tablets can be time consuming and complicated so here are two sites that take all the hassle and techno-babble out of the research for you. These are the reviews and comparisons as provided by CNET, TabletPCReview, and PCWorld.

Look What Others Are Saying about Kindle Fire:

“The Fire gives me the features I want at a price point that’s less than half of the iPad 2. I can check my email, browse the Internet, maybe play a few games, most importantly, I can read magazines in color on a Kindle.” – Gizmodo

“At $199 the Fire is less than half the price of the Apple iPad, which starts at $499.  It is the first tablet from a major company to seriously undercut the iPad in price.” – New York Times

“Consumers will see the iPad and Kindle Fire side-by-side… and simply ask ‘why does the iPad cost at least $300 more?’ They will look at the features – the comparable amount of content, the Kindle’s million e-books, streaming TV shows – and pick the Fire.” – Extreme Tech

“The Kindle Fire is the tablet you need at the price you’ll be willing to pay.” – Technology Review

“Amazon’s Kindle Fire is likely to be the first successful tablet not sold by Apple, and there are several good reasons for it: the low price of $199, the convenient, portable size of 7 inches, and a rich catalog of books, movies and music offered through Amazon’s Web-based services.” – Ars Technica

“The Fire is the real deal and it’s going to disrupt the equilibrium of the existing market for media devices.” – Chicago Sun Times

“There’s a new mayor in Droidville. But this guy didn’t roll into town with pomp and circumstance.  He strolled down Main Street and simply offered more than any other candidate, extolling a plan based on down-to-earth sensibility and affordability. Meet the Kindle Fire.” – Seeking Alpha

Looks like I may have found the perfect Holiday gift for my wife.

The iPhone is too small to read her emails and browse websitesthat aren’t mobile ready. The laptop is too big and bulky and quite cumbersome and timely to launch in many inconvenient locations. The Kindle Fire is a bit smaller in size and in price making it the perfect mobile device for all her needs.